skip to main | skip to sidebar

Enjoy over 10000 funny, silly and outright foolish jokes. Every time you visit the application you will be offered a new nugget of joy! If you are really addicted, you can click the "new joke" option for more laughs or groans!

Visit Facebook and install this application:
http://apps.facebook.com/webfoolish/
Posted by scummings at 1:30 PM No comments: 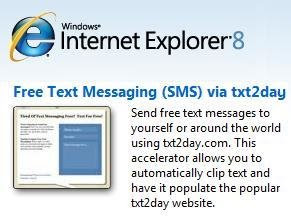 Tired of cutting and pasting information from a document, website or application into txt2day? Now there's a better way with the "Text Message with txt2day Accelerator!" Now you can simply select some text and then click on the blue Accelerators icon. For example, you may want to text a friend directions to the location of a pizza place featured on a webpage. In the past, you would need to copy the address from the webpage, navigate to txt2day, and paste in the address. With the "Text Message via txt2day" using IE 8+ Accelerator, you can automatically place the text into the txt2day website message box! Accuracy with ease!.

Now you can visit our SMS flirts and jokes site and simply highlight and right click to use the Text Message via txt2day" using IE 8+ Accelerator. Send the latest news headline, twitter or facebook status update or a great nugget from wikipedia. Just highlight the text, right click and send the text using txt2day! No more typing! Send text today!

Posted by scummings at 2:03 PM No comments:

Many of the providers are listed in our beta zone for your testing and texting pleasure!

Please let us know if they work for you!
http://www.txt2day.com/betazone
Posted by scummings at 7:57 AM No comments:

Short Message Service (SMS) or more commonly text messaging has become a global phenomenon. In technical terms, a short message of 160 characters or fewer (including spaces) can be sent from or delivered to an enabled mobile phone. The service is typically available on most personal mobile devices that are equipped with wireless telecommunications.

An SMS is typically delivered within seconds but can depend upon the gateway, network traffic and the receiving party's availability. In recent years, SMS has become a phenomenon especially among young people. SMS is popular because it is an effective way of communicating directly to the intended recipient as close to real time as possible.

SMS text messaging is the most widely used data application on the planet, with 2.4 billion active users, or 74% of all mobile phone subscribers sending and receiving text messages on their phones.
The most common method of SMS communication is person-to-person, but text messages can also be used for interacting with automated systems. Typical examples include automated downloads of mobile services, polls or participating in contests.

Sending text messages is a cost effective and efficient way of communicating with friends. A cell phone is not mandatory for texting. There are some internet websites that allow users to send text messages free of charge to the sender. These services are often supported by advertisers or donations.

One such site is www.txt2day.com which is a popular internet website supported by advertising. The site offers free text messaging to countries around the world including United States, Canada, United Kingdom, India, Japan and many more. Many internet sites have sprung up that specialize in various popular texting interest including jokes, flirts and text reminders.

(c) txt2day
Posted by call accounting at 9:17 AM No comments: